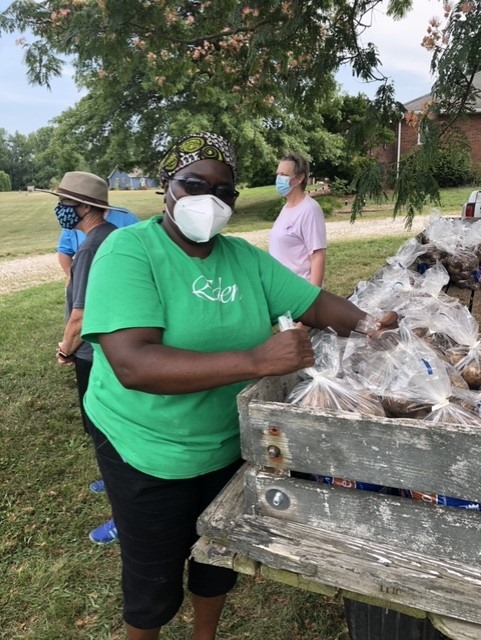 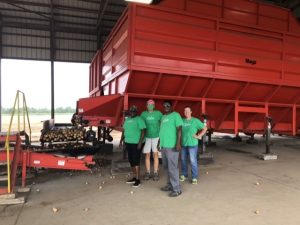 Growing up in southern Indiana, Karen Pepmeier and her friends would comb the farm fields during harvest season, gathering leftover ears of corn to raise money for their youth group.

“You hate to see it lay in the field and rot,” Pepmeier said. “If you grow up in one of these areas, you’re very familiar with the waste that occurs there.”

Nearly 50 years later, Pepmeier, now a student at Eden Theological Seminary, has assembled a group of volunteers and farmers to funnel this excess produce into food deserts in St. Louis. The program has harvested thousands of pounds of vegetables from Indiana farms this summer, distributing it to St. Louis food pantries and soup kitchens.

For many farmers, having leftover produce is an unavoidable issue.

At harvest time, farmworkers move quickly along the rows of sweet corn, selecting only unblemished ears of a certain size, said Jana Vieck, whose family has farmed in southern Indiana since the 1860s.

“When you’re shopping at the grocery store, you’re looking for a pristine ear of corn,” said Vieck, former dean of the College of Health Science and Human Performance at Vincennes University. “If it’s not big enough or if it’s not perfect, people typically don’t want it.” 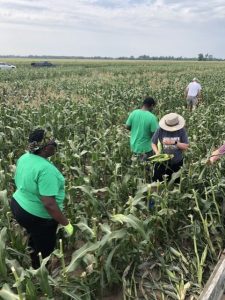 Given that farmers are often operating on razor-thin profit margins, it also doesn’t make financial sense to harvest every single vegetable, Vieck said. From a business perspective, leaving leftover produce in the fields is usually the most economical option.

She and her husband, Lonny Vieck, who works for a fertilizer company, have partnered with Pepmeier to collect the excess produce and send it to food pantries in St. Louis. They’ve also become de facto representatives of the fledgling project, persuading their friends and family to open their fields to the volunteers.

For the Viecks, sharing excess crops with marginalized communities — or gleaning, as it’s known in the Bible — is an important part of their faith.

“My husband and I really believe that if your faith is just about going to church on Sunday, then you’ve missed the whole point,” Vieck said. “If we know that there are people who are hungry and we know that this food is here, how could we not participate in this?”

Students and staff from Eden Theological Seminary have made three trips this summer to Vincennes, Indiana, a farming community on the Illinois border.

“We’re driving more cars so we can socially distance, but that also means we have more room for produce,” said Kristen Leslie, a professor at Eden Theological Seminary and program co-organizer. “Our cars always smell like corn by the time we get home.”

Since mid-July, the group has collected and distributed more than 3,000 pounds of sweet corn and potatoes. But bringing fresh produce to food insecure areas in St. Louis is just one component of the program, Leslie added. 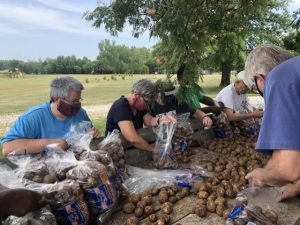 “If that was all we were interested in, just making sure food didn’t go unused, there are actually much more efficient ways to do that than what we’re doing,” Leslie said. “But we’re interested in connecting communities.”

Volunteers from St. Louis, who may have never set foot on a farm, have a brief window into the challenges of small-scale farming, trying to time their harvest based on the weather or push a tractor out of the squelching mud.

“They’re learning about our lifestyle and where the food comes from, and we are learning about what happens to this food,” Vieck said. “Where’s the gap? Why are there areas that don’t have access to all this food when we’re in a country that has an abundance of it?”

For Pepmeier, it has been heartening to watch people from vastly different backgrounds sit down and have a conversation.

She hopes to expand the program and partner with other farmers in the St. Louis area, but she doesn’t want to lose the “cultural exchange and personal connection.”

“Bringing a truck full of produce is helpful for a day,” Pepmeier said. “But if we can teach people how to share food, how to grow food and how to look out for one another, in the grand scheme of things, I think that’s better.”