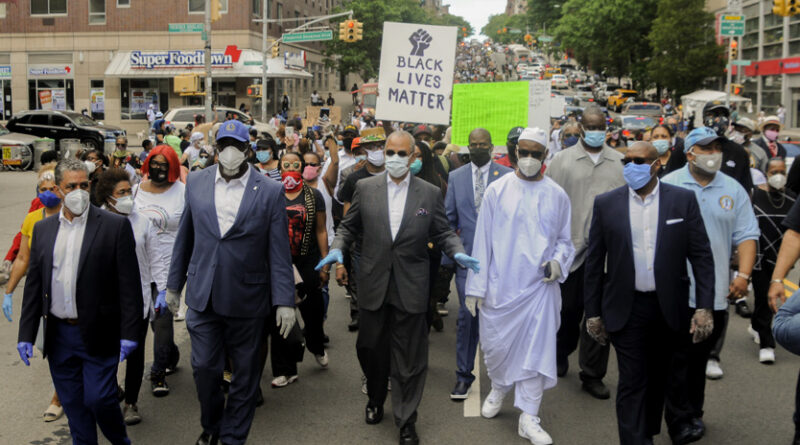 These actions and more are all ways in which Eden Seminary alumni, faculty, staff, students, members of the Board of Trustees are participating in the events of these days and beyond.  Racism as the core of the current triple crisis of state violence, economic chaos, and global pandemic reinforces Eden’s commitment to goals of “race equity and its intersecting oppressions, interfaith collegiality, and vocational resilience” for all curriculum, community, and programming.

The Illinois South Conference UCC presented a Peace Rally at the Conference office in Highland, IL. 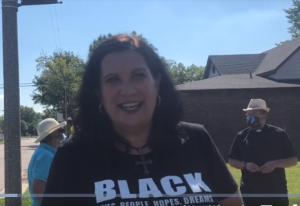 The group held a time of silence for 8 minutes and 46 seconds to remind us of the time that George Floyd was held without breath and to think about the problems surrounding the system. As names of fallen Black brothers and sisters were called, a bell was rung to honor their lives. Conference Minister, Rev. Shana Johnson (Eden Class of 1997) thanked members of the Justice and Witness Team, including several Eden alumni: “A BIG thank you to P Jerry Bennett, (Class of 1992) Tim Darmour-Paul (Class of 1987), Kay Ahaus, Margie Lindhorst, Barb Bray, Sam Foskey, Norma Patterson (Eden LIFE), and Richard Ellerbrake (Class of 1958) for making this possible. Also thank you to Barbara W. VanAusdall, David Shanks and Jack Spratte (Class of 1970) (their roadie) for providing music.” Rev. Johnson speaks to the Belleville “News Democrat” about the importance of white church people showing up for Black lives.

Rev. Dr. Jesse Williams, (Eden MDIV, DMin and former Trustee) Senior Pastor of Convent Avenue Baptist Church in Harlem New York joined with many Baptist and other clergy colleagues in NYC for a silent march for freedom and justice on June 7.

Dr. Deborah Krause, in-coming president of Eden Seminary, speaks with alumni and on St. Louis Public Radio about the role of the Seminary in these times.

Eden’s Acting Academic Dean, Dr. Sharon Tan, adds signature to the “Statement of Solidarity by Asian and Asian Descent Presidents and Deans of the Association of Theological Schools” June 18th.

Deaconess Foundation and CEO, Rev. Dr. Starsky Wilson (class of 2009) has been awarded the “St. Louis American” 2020 Health Advocacy Organization of the Year. This award recognizes the health advocacy done by the Deaconness Foundation by supporting Black led advocacy organizations to leverage power for children, families and communities in St. Louis.

Eden faculty highlight voices of solidarity of diverse groups with Black colleagues and communities condemning anti-Blackness perpetuated through systems and structures.  Statement by the Steering Committee of the Association of Asian/North American Theological Educators (AANATE).

Eden Seminary is a co-sponsor of the  Jewish Congregation Shaare Emeth’s virtual event that spotlights the lawsuit Sines v. Kessler. The lawsuit holds accountable the neo-Nazis, white supremacists, and other far-right extremists who conspired to orchestrate a weekend of violence in Charlottesville in August 2017, which resulted in Heather Heyer’s death and extensive injuries.

A Virtual Vigil through the Eden Seminary Chapel on May 31st included voiced prayers of Eden alumni and faculty. Renee Johnson (class of 2020) “Holy Spirit transcend our differences and give us respect for humanity #blacklivesmatter#justiceforgeorgefloyd 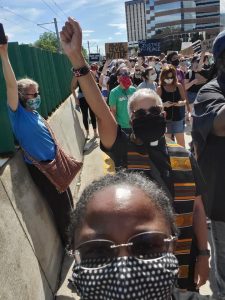 Christopher Grundy (faculty) “For the long night of racial oppression and violence, and the hope for a new dawn.  God, in your grace…”

The Eden-initiated Facebook group “Leading On-Line: A community of practice for progressive Christian ministry” continued to embody a co-learning space for this moment.  Members this week shared their experiences as public theologians and preachers in these days.  Creativity emerged from the juxtaposition of Pentecost and the triple crisis.  Find this Facebook group to join the ongoing conversation.

In their weekly online conversation, “It’s Not Always Black and White,” Aaron Rogers (class of 2012) and Jon Stratton  (class of  2011) were joined this week by Cassandra Gould (class of 2010) and Faith Sandler  (The Scholarship Foundation of St. Louis).  Their dialogue focused on “protest and the scourge of police violence” from the perspective of their experiences as part of organized protests.

Anthony L.D. Scott (class of 2013) challenged other preachers with this observation. “I’m leaning into news ways to lead and minister. I think finding new ways to get word out is what this moment is all about.  AND my church is sharing my sermon like wildfire.  How are y’all addressing this moment?  “Waiting for Rosa”  medium.com   and  Pentecost Sermon May 31st.

Chuck Currie (class of 2006), part of organized protests in Oregon, along with his children, acknowledged the complexity of this moment. “If you are protesting or just out and about, please #WearAMask, your life is precious. The life of your neighbor is precious. With re-openings, some premature, and protests, we need protection to keep one another safe. #COVIDー19 #GeorgeFloydProtests #WeekendWisdom ” 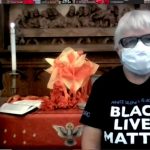 Eden voices also have been conversation-partners and support statements of multiple denominational and interfaith organizations.

Eden walks in solidarity with statements of other UCC-related seminaries,
United Seminary of the Twin Cities (Minnesota)