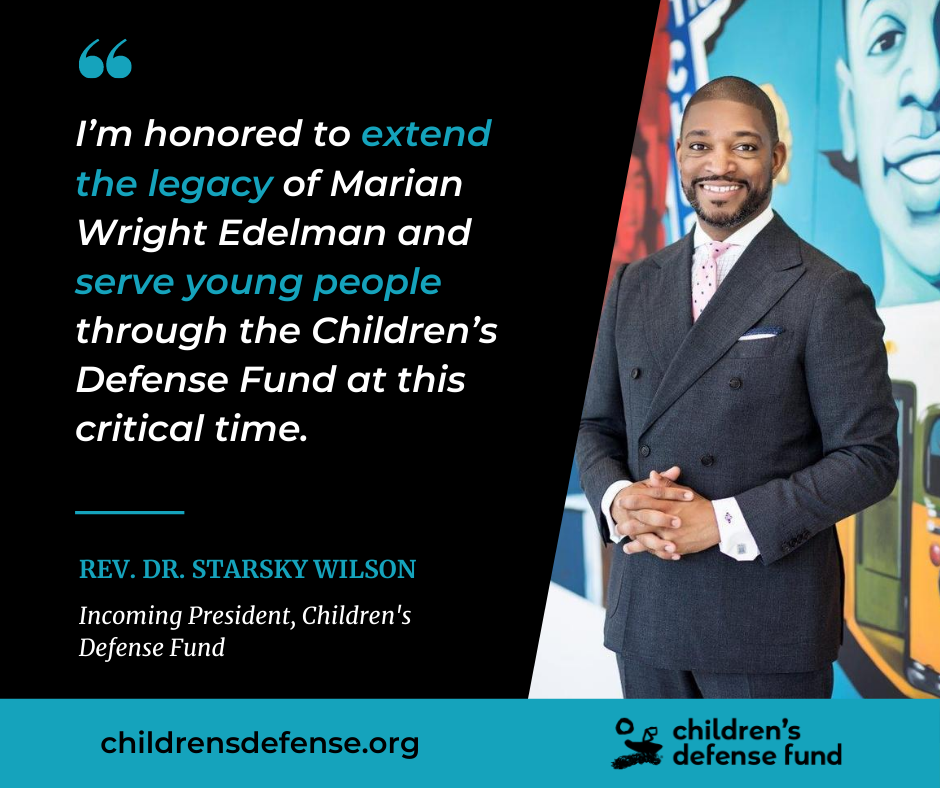 As America is immersed in a new movement demanding an end to racial and economic injustice, the Children’s Defense Fund (CDF) announced the appointment of Rev. Dr. Starsky Wilson as CDF’s next President and CEO. He is a national racial justice thought leader, community organizer and movement builder and a champion of children’s rights with a longstanding relationship with CDF. He led the effort to bring the CDF Freedom Schools® model to children and families in the St. Louis area and demonstrated his leadership at CDF’s annual Samuel DeWitt Proctor Institute for Child Advocacy Ministry at CDF Haley Farm. He co-chaired the Ferguson Commission after the tragic 2014 shooting of teenager Michael Brown by police, which released the “Forward Through Ferguson: A Path Toward Racial Equity” report calling for sweeping changes in policing, the criminal justice system, child well-being and economic mobility.

CDF’s mission to Leave No Child Behind® and ensure every child a Healthy Start, a Head Start, a Fair Start, a Safe Start and a Moral Start in life and successful passage to adulthood has never been more important than during these perilous times for children and our nation. Dr. Wilson shares CDF’s servant leadership values and is committed to training the next generation of servant, not self-serving, leaders. In his assumption of the presidency, he is the right leader for CDF at this time and I could not be more pleased.

Dr. Wilson has worked long and hard over many decades to pursue and achieve God’s vision of community and justice with peace and love. He has been President and CEO of the Deaconess Foundation since 2011, a faith-based grant-making organization supporting a movement for child well-being in St. Louis through philanthropy, advocacy and organizing for racial equity and positive child-focused public policy. Under his leadership, Deaconess invested nearly $90 million to improve the lives of children. Responding to the dual pandemics of COVID-19 and systemic racism, Deaconess launched collaborative funds investing in Black-led recovery efforts and racial healing this year. Dr. Wilson serves as board chair for the National Committee for Responsive Philanthropy (NCRP) and vice-chair of the Forum for Theological Exploration (FTE).

For 10 years from 2008-2018, Dr. Wilson pastored Saint John’s Church (The Beloved Community), an interracial, inner city congregation related to the United Church of Christ where he established The Beloved Community Conference resourcing social justice ministries and Sojourner’s Truth: Celebration of Preaching Women. After the police killing of Michael Brown his church hosted the #BlackLivesMatter Freedom Ride to Ferguson and served as the welcome center for the #FergusonOctober.

Dr. Wilson has a bachelor’s degree in political science from Xavier University of Louisiana, a Master of Divinity degree from Eden Theological Seminary, and a Doctor of Ministry degree from Duke University. He is a member of Kappa Alpha Psi Fraternity, Inc. and Sigma Pi Phi Fraternity. He is married to Dr. LaToya Smith Wilson, a dentist for St. Louis Children’s Hospital, and they are raising four children.

Dr. Wilson has shaped policy from the ground up, listening to and learning from those affected by unjust systems, structures, and policies—especially young people. The hurts, hopes, struggles and stories of children, especially poor children, have shaped his community strategies for systemic change. Dr. Wilson says he is now honored to serve young people through CDF at this critical time when there is so much work to do. “As we wrestle with the politics of the pandemic, protests, and a presidential election, it’s a little too easy to forget about crafting policy for children who don’t get to vote, don’t have lobbyists and can’t make campaign contributions…According to the U.S. Census Bureau estimates, 2020 is the first year in American history where the majority of children in our country are children of color. Child well-being and racial justice are intimately and forever intertwined. This makes the civil rights legacy and child advocacy vision the Children’s Defense Fund has woven together for nearly fifty years even more vital.”

I’ve gotten to know and respect Starsky over many years. As Rev. Dr. Otis Moss, III, Senior Pastor of Trinity United Church of Christ in Chicago, says: “Rev. Dr. Starsky Wilson is an extraordinary bridge-builder who has spent his ministry being a ‘repairer of the breach.’ He has organically created meaningful relationships with young Black Lives Matter activists and civil rights icons. This is not happenstance, but a skill nurtured by a deep commitment to community building and his belief in the power of developing organizational efficiency with courageous compassion. This is the moment in history where leaders of Wilson’s caliber are so needed to build bridges, speak prophetically, love fiercely, and organize carefully to create a new world for our children yet to be born…[T]he only phrase that is appropriate comes from the epistle penned by Paul to the church at Corinth; ‘Eyes have not seen, ears have not yet heard…’ what tomorrow holds for CDF as it marches into the future under the leadership of a grounded and gifted young servant named Starsky Wilson.” It is with immense joy that I welcome Starsky Wilson as my successor as President of the Children’s Defense Fund. He will continue to lead our movement to ensure no child is left behind.